Off the Field with AKA: Men’s Volleyball Coach Charlie Wade

Home / Off the Field with AKA: Men’s Volleyball Coach Charlie Wade 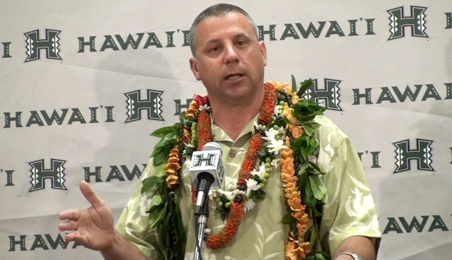 Off the Field with AKA: Men’s Volleyball Coach Charlie Wade

Off the Field with AKA: Men’s Volleyball Coach Charlie Wade
By Jacob Dazzeo

On June 10th, 2015 I was able to sit down with men’s volleyball coach Charlie Wade and get his views on a few different topics that were close to him and his philosophy as a coach. To start off the interview I asked Coach Wade about the five-year plan he created when he first got the position of Warrior Men’s Head Volleyball Coach at the University of Hawaii. He told me that the plan was heavily focused on recruitment. Charlie says that “most of the elite teams have stockpiled talent. You have to have a lot of depth and guys who can play.” Having depth allows most of the team’s reserves to get the experience they need to compete at a high level if and when they’re called upon. Depth also allows first-year players to watch and learn from the bench instead of being thrown into the starting rotation right away. The second part of Coach Wade’s five-year plan was about “changing the culture.” When asked what “changing the culture” means Coach Wade told me it’s about “getting guys to do [their] best in the classroom and finding out just who [they] are as a person, as a teammate, and as a community servant. Those things are just as important as anything [they] can do on a volleyball court.”

Now knowing something about Coach Wade’s philosophy, I asked him about his beginnings. Before coaching at University of Hawaii, he was the head coach of women’s volleyball at the University of the Pacific. He considers his three years there to be “extremely valuable” because he learned “to be the head guy and make decisions.” I went on to ask Coach Wade the difference between coaching at Pacific and in Hawaii. He told me that “there is no better place in the world to coach volleyball than in Hawaii. The fans are great, games are live on TV.  It’s really a big deal to a lot of people. It’s not like that anywhere else.”

The fact that player’s hard work is more appreciated in Hawaii “speaks to why UH athletics are so important. They do matter to the people in this state. There is a great deal of pride in seeing the team succeed and seeing the team beat those big name schools. There is genuine enjoyment in seeing us be successful. That’s the difference between coaching [on the mainland and here]. It’s because UH athletics matters so much to the people in the state. We’re getting media requests to go to the neighbor islands and visit, to either play a scrimmage or do a clinic. People genuinely enjoyed our success this past season and want to be a part of it.”

Coach Wade went on to tell me about the time he visited the East coast just a few weeks ago. “I’m walking around the Richmond Convention Center in Virginia and I have people coming up and stopping me periodically throughout the day. They turned out to be UH alums who live on the East coast and they say something like ‘Hey great season, we watched every game’ and I’m thinking wait a minute these games don’t start till 1 o’clock in the morning their time. ‘Yea, we never went to bed until the game was over.’ That part was really cool.”

To start his University of Hawaii coaching career, Coach Wade was the assistant coach for the Wahine Volleyball team under Coach Dave Shoji. Knowing Coach Shoji’s legendary status in Hawaii, I had to ask what Coach Wade learned from Dave. Coach Wade was able to give me the following piece of wisdom, “One of the things that I learned from Dave was that you can’t fight all of the battles and you can’t put out all of the fires at once. Sometimes it’s better to watch and let things unfold a little bit before you jump in and try to fix something… and many times it will take a path where it’s not nearly as critical and the problem resolves itself in a good way.”

Coach Wade has experience that not every coach has since he coached a women’s team and now a men’s team so I wondered if there are any major differences between coaching the two different genders and how he handled those differences. “The most significant difference is that the women get twelve full scholarships and the men get four and a half and traditionally [the men’s rosters] are bigger.” This makes recruiting a completely different game. “You have to predict market value and you have to decide who is going to get what [amount of financial help]. Nobody gets a full ride, most guys receive nothing.” Another difference that Coach Wade has noticed is that “women are much quicker to buy into a team message.  Men want to have something proved to them.” By that he means that the women he has coached tend to be more open to changing their techniques and sacrifice their results in the short-term in order to better their game for the long-term. In his experience, men are less likely to buy into a new technique if they have to sacrifice short term performance. That is not to say that he prefers one over the other.  It just means that he has had to adjust his expectations and coaching style over time.

I asked Coach Wade what goals he has for the next season. He replied, “making sure that everybody graduates, getting everyone to do [their] best and post the highest GPA that [they] can, to produce people who are going to contribute to the community, and then along the way trying to win as many games as we can. We try to shoot for winning the Outrigger Hotels Invitational, qualify for the postseason in our league, and [being] in a position to compete for a national title. That is the ultimate prize.”