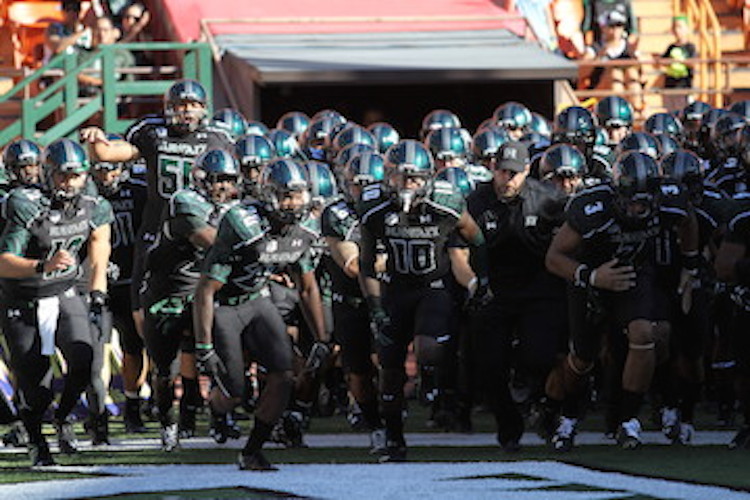 Props to 19 members of the University of Hawaii Football team who made the 2014 Academic All-Mountain West team.  They were some of the 522 student-athletes who made the team this year from all of the teams who make up the Mountain West Conference.

The 19 UH Football players named to the team, their year in school and their major is as follows:

In order to be recognized on this list, students-athletes must maintain a cumulative grade point average of 3.0 while making a significant contribution to their team.

University of Hawaii starting Quarterback Ikaika Woolsey is a Family Resources major who made the list. He said that being recognized makes him feel as though his hard work is paying off.  It also makes his parents proud of what he has accomplished.

Woolsey says that his success in the classroom is a result of meticulous planning each week, especially before away games. He said, “In order to excel in the classroom I finish all of my assignments before heading on the road. This allows me to clear my mind and focus on the game.”

Another standout athlete recognized was Wide Receiver Ryan Pasoquen. Ryan is a Communications major with a minor in Sociology who attributes his high GPA to allocating his time wisely at the beginning of each semester. Upon receiving his syllabi for his classes, he marks important due dates and exams on a calendar. On days that practices are light, Ryan tries to get the bulk of his schoolwork completed.

Ryan says that in his case, his mentality as an athlete translates well into the classroom. “I’m just as competitive in the classroom as I am on the field,” Ryan said.

These two standout athletes recognize that developing strong time management skills will be important to their future. Woolsey has dreams of playing in the NFL.  If that does not work out, he wants to pursue a Masters Degree in Adaptive Physical Activity (APA).  Pasoquen has plans to enter the Coast Guard and participate in Federal Law Enforcement and Maritime Security.

Regardless of what happens on the field, UH fans have a lot to be proud of when it comes to the 2014 Football team, many of whom have their priorities in order, both on and off the field.  Congratulations to all who wi